>> Now that the first buildings are in place and people see that it works, the decisions are becoming increasingly courageous. <<

MGG²² - more than living.
MGG²² stands for the new residential project in Mühlgrundgasse/ Fahngasse in Vienna's 22nd district. A total of 160 housing units has been built on three plots. The special thing: Here, for the first time in social housing, thermal component activation (TCA) is being used for heating and cooling with wind energy. In addition to the energy concept, the project also impresses with its open space design. The adjoining belt of woods and meadows can be used as a large-scale community garden. The terraced gardens, balconies and loggias on each floor of the resitential building complete the attractive environment in the sense of an "edible city".

An important building block for the city of the future.
Thermal component activation is now being implemented for the first time in subsidized housing in Vienna as part of the MGG²² project. This is an important step towards a CO2-neutral city. The technological innovations pursued by the MGG²² project can be important components of ecologically sustainable construction and management for the city of the future. At the same time, a completely new perspective on affordable energy solutions is opening up. The IBA_Vienna sees itself as a platform for innovations in social housing. The solutions developed are to be introduced into the public discourse and made available to a broad public. The connection between ecological and economic sustainability and social processes points to the future of the new social housing!

Using wind and thermal component activation to combat climate change.
The technology is very simple - the concrete (in the solid ceiling or also in solid walls) is thermally activated as a transfer and storage mass via built-in pipe systems in which hot or cool water flows, depending on the heating or cooling purpose. Over its entire surface, the solid component absorbs or releases heat, depending on the heating or cooling situation. Due to the comparatively large transmission area, the system temperature differences can be kept low. This means that the medium does not have to be heated up as much as, for example, the water in the central heating system, whose radiators provide a much smaller transfer surface. Due to these lower supply temperatures, heat pumps can also be used efficiently for heating.

The heat for heating and hot water is generated in the project area on Mühlgrundgasse via brine/water heat pumps in combination with deep geothermal probes, in summer the probe field is regenerated. A total of 30 geothermal probes, each 150 meters deep, are being bored and installed. From a depth of around 10 to 20 meters, there is a uniform temperature of 10 to 12 °C throughout the year. The extracted geothermal energy is brought to a higher temperature level in heating mode with the help of a heat pump. In cooling mode, heat is introduced into the ground. The buildings themselves are built to the low-energy house standard, with a heating requirement of 24-28 kWh/m2a.

Storage function.
Another new feature of this project is that excess wind energy can also be stored in concrete. A wind-generated electricity load management system ensures that the electricity for operating the heat pumps comes largely from surplus production. 30 to 40% of the final energy requirement is needed for heating and cooling. 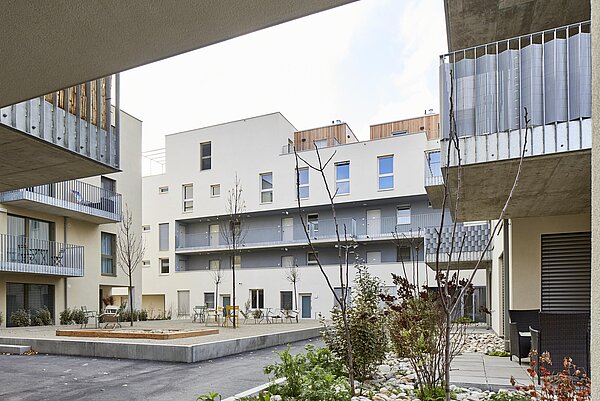