>> An intensive dialogue with the owners in the block was already initiated in the early development phase and has been continued on an ongoing basis. The resulting constructive cooperation has now led to all owners supporting the present development proposal and seeing their interests safeguarded. This dialogue should of course be continued in order to seek further synergies. This cooperation is also to be continued in the construction phase or in operation. <<

Cooperative development in existing buildings.
Based on the "Masterplan Gründerzeit" significant and previously unused parts of a Gründerzeit block in Favoriten were redeveloped entirely with the owners in the G'mischter Block. In close coordination with the district and the residents, a change in zoning was achieved, which became legally binding in September 2020. This means that more usable space can now be created on the ground floor. In addition to 75 rental apartments, four commercial units will be created here: a shop, a kindergarten and two offices or surgeries. The principle of mixed use is the central planning approach.

Developing common goals in dialogue.
The development of several properties in a Gründerzeit block with diverse ownership structures is always associated with a high degree of complexity. In order for mixed use to actually work, intensive coordination between the developers, the planners, various experts and the administration is required in addition to in-depth dialogues with different user groups about their needs and requirements, even in the early development phase. The G'mischter Block was strategically prepared with care and consistency over a period of more than two years, with intensive discussions already taking place in the initial phase. This has led to a consensual approach, which - already now and especially after the realization - enables a coexistence within the block and also in the surrounding area. The use of the ground floor zone by the business premises of "handverlesen" is a unique feature. The concept provides for the presentation and sale of regional foodstuffs. With an exhibition and working kitchen, a bar with lounge area for tastings, lectures as well as private celebrations and public events, the restaurant is open to the residents of the neighborhood.

Lots of green in the densely constructed city.
The G'mischter Block is also characterised by resource-saving constructional implementation and sustainable planting concepts. Planting areas and soil boxes are planned from the outset and are integrated into the building's shell structure, i.e. no separate static system is required. Resistant plant species guarantee longevity and low maintenance.  A cantilevered band planted with a variety of plants and grasses visually separates the commercial areas on the ground floor from the offices and residential units above, on whose facade the interplay of the cantilevered plant troughs is continued. This structures the facade and reduces heat radiation in summer. In the inner courtyard, too, the intensively greened flat roofs and shady tree islands have a positive influence on the microclimate.

Renewable energy & active cooling.
A heat pump in combination with geothermal energy is installed for heating, cooling and hot water supply. The underfloor heating installed on all floors serves as cooling in summer. In the attic apartments, the flat roofs are additionally cooled via concrete core activation, which eliminates the need for air conditioning split units and recoolers on the roof. All waste heat, including that from the refrigeration machine required to operate the ground floor, is sent to the geothermal probe field. This recharges it in summer and achieves greater efficiency in winter.

Change without displacement.
A transformation of initially heavily commercial or mixed-use old stock in Gründerzeit areas often takes place in Vienna, but it also often leads to highly screened and high-priced residential situations that bear little relation to the immediate surroundings. This is particularly true when the aim of the redevelopment is to upgrade the entire block from the very beginning of the planning process. In the case of the G'mischter Block, the aim of avoiding displacement effects was therefore deliberately formulated. The project is freely financed but strongly oriented towards the values of subsidized housing. In addition, the consistent derivation of the overall concept for the three properties from the "Masterplan Gründerzeit" is still new and deserves special attention, not least because of the model effect for other comparable development projects. 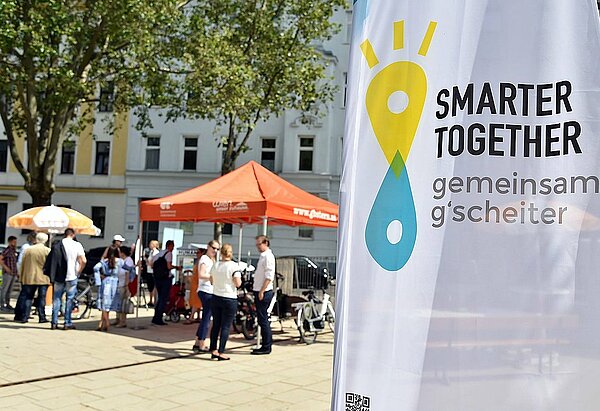