Circular economy in the housing sector

Within the EU innovation project HOUSEFUL (Grant Agreement N°776708), innovative systems for recycling household waste or wastewater as resources are developed on site and implemented in demonstration buildings. The aim of the HOUSEFUL project is to develop technical solutions in combination with services in a participatory process with stakeholders at the building level and thus define circular economy models. The EU project focuses on solutions that enable efficient use of water, waste, energy, and material resources. These solutions will be made generally available on an online platform at the end of the project.

In four demonstration buildings (2 in Spain, 2 in Austria), different technical solutions are applied and developed into circular business models together with stakeholders

The demonstration building in Vienna is located in Floridsdorf on Donaufelder Straße. It can be compared with about 70% of all residential buildings in Austria from the point of view of building construction. For this reason, it is an interesting model for possible replication and dissemination activities within the project. HOUSEFUL will improve the closing of loops in this building by proposing solutions for calculations, new methods for stakeholder engagement, and co-design of innovative solutions for materials, waste, and energy resources.

Building Integrated Modeling (BIM) models and "material passports" will be created for all HOUSEFUL demonstration buildings to enable deconstruction capability of the building at the end of its life cycle.

The demonstration building in Fehring, in southern Styria, is the project Cambium – Living in Community in the former Hadik Barracks Fehring. Here, the organic waste from the building is collected and converted into resources that can be used on site.

The community project Cambium has set itself the goal of building an intergenerational community of solidarity that acts in a socially and economically as well as ecologically sustainable manner. The association leased the site of the former Hadik barracks in Fehring in 2017 and purchased it in 2019 via an asset pool, a direct loan campaign with over 200 investors.  There are about 70 people living on site who are transforming the former barracks site into suitable living and working areas, building an ecological agriculture, as well as workshops, seminar and event spaces.

Cambium is also a demonstration site for the HOUSEFUL project funded by the European Commission under Horizon2020. The associated goals of decentralized recycling of resources make a significant contribution to the sustainable transformation of the site.

For this purpose, the collected domestic wastewater (toilets, showers, kitchen, etc.) of the residential building is first pretreated in a four-chamber pit. Most of the solids contained in the wastewater settle there. The liquid overflow, i.e. the solids-separated part of the wastewater, is then purified in an indoor plant purification and water recycling plant, the vertECO© developed by alchemia-nova, in a newly built conservatory. The treated water (1000-1500 l/day) is used for irrigation and fertilization of plants in the conservatory itself, as well as on the agricultural land.  In addition, it can also be used as service water, for example for flushing toilets.

The conservatory thus combines water treatment and water reuse as well as air purification through the use of plant- and soil-based air filters. In the spirit of the circular economy, the constructed conservatory itself consists of materials and components that are as local and recyclable as possible. In cooperation with materialnomaden, re:use materials are also integrated. In addition, the conservatory is heated with the help of a biomeiler, i.e. a compost heater, in which local or regional biomass is used for energy and the thermal energy of the composting process is used for heating.  This also produces valuable humus (approx. 75 m3/year) which is used in agriculture.

The sedimented solids are periodically (1-2 times per year) removed from the four-chamber pit and applied to a humification basin. The solids accumulate and mineralize on the filter surface and reed plants or roots support the decomposition, resulting in nutrient-rich humus over the years (about 4m3/year).

In an independent cycle, kitchen waste is recycled in a household-level biogas plant (HOMEBIOGAS).  The biogas (600l/day) is used locally for cooking and the resulting digestate (10l/day) for fertilizing. The household biogas plant of the Israeli project partner HOMEBIOGAS was adapted to Austrian legal and safety regulations during the approval process and is the first of its kind in Austria.

You can find more info about the Cambium project here: How to live in a HOUSEFUL house? | alchemia-nova

Which products are used at HOUSEFUL?

The Vienna-based Institute for Circular Economy and Nature-based Solutions – alchemia-nova – coordinates the demo building Cambium in Fehring and is also responsible for all greening-related cycles of all demonstration buildings, as well as their automation and monitoring. alchemia-nova is a pioneer in applied decentralized circular economy and works in many other national and international projects, conducting research on products and processes for the implementation of circular economy.

Here you can find some of the developed products, which are also applied and further developed in HOUSEFUL: 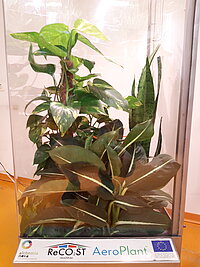 AeroPlant is a nature-based air filter that uses the power of plants to purify air. A low-energy fan actively draws in air to send it through an absorbent root substrate and plant foliage, releasing fresh and healthy air. AeroPlant also cools and humidifies the air. Not only is AeroPlant much more aesthetically pleasing than comparable conventional filters, it also requires significantly less energy.

The vertECO technology treats wastewater/grey water in the form of a vertical constructed wetland. The underlying principle is the use of specific plant species in a specific order to promote the purification of polluted water through microbiological activities in the root zone. The vertical arrangement optimizes the use of space and relies on gravity to distribute water throughout the system. vertECO can be installed outdoors or indoors. These factors enable the key innovation of integrating ecosystem services and green aesthetics directly into the building, resulting in numerous benefits.

To mitigate climate change impacts, cities are investing in green infrastructure – horizontal and vertical green spaces. To grow, these green spaces need lots of water and nutrients. alchemia-nova's green walls work with wastewater, using contaminants as plant nutrients, while purifying water for reuse. "LooPi – the plant urinal for men and women" is the latest innovation in the series of functional green walls. LooPi is a combination of wastewater management and green infrastructure: wastewater is purified through the integrated green wall and reused for flushing.

This project was funded under Grant Agreement No. 776708 from the European Union Research and Innovation Program (Horizon 2020). 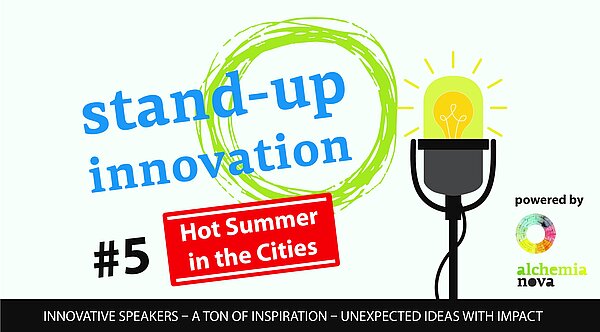 Yes, we all can feel it, summers in cities, like Vienna get sometimes unbearably hot. But let’s not complain like typical Viennese. Let’s focus on the solutions. How to counter “urban heat islands”? Professional inputs and a discussion with the audience will address the question how to oppose urban heat islands. 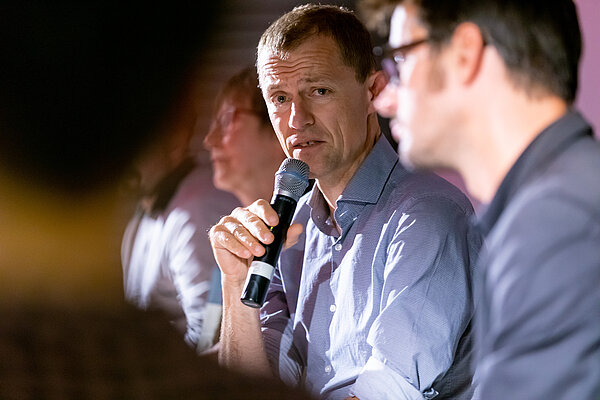 In 2020, the summer school will have a themativ focus on climate adaptation and mitigation in social housing. Global warming and climate change bring about dramatic challenges for social housing.