Tips in the Grätzel


Here you can get information about the development of the area and the status of planning. If you have ideas and suggestions, you are invited to participate.


Even before the start of construction of the “An der Schanze” neighborhood in Donaufeld, another IBA_Vienna project can be visited in Donaufeld: the vivihouse, a wooden building, implemented in modular timber frame construction, which is specially optimized for the use of ecological raw materials.

Walk and cool off on the Upper Old Danube


A few minutes’ walk from the future “An der Schanze” neighborhood, the banks of the Upper Old Danube invite visitors to take a walk and cool off on hot summer days.

Developing the city in dialogue

>> The two-stage process made many things possible that are elementary for neighborhood development. Thus, in an intensive dialogue, measures effective for the urban climate could be implemented across building sites. <<

The "An der Schanze" neighborhood is an example of how the experience gained in the course of the IBA_Vienna can be applied to the subsequent neighborhood development. In this way, people are constantly learning and improving. In this case, it was above all the realization that the intensive dialog between all those involved gives rise to a lively neighborhood.

Talking to each other, right from the start
The developer competition "An der Schanze," launched by wohnfonds_wien in cooperation with IBA_Vienna, started in February 2019. Even at this early stage, the focus was on dialog. In the second competition phase, working groups initiated by the IBA_Vienna dealt intensively with the topics of ground floor and base zone, social sustainability, open space and mobility in the new district. These working groups covered a broad spectrum and were composed of representatives of the developers as well as experts from planning and social sustainability. This made it possible to coordinate topics and content that would otherwise not be addressed in single-stage processes.

Representatives of the population were also involved at an early stage: In addition to three large workshops, organized and accompanied by the RAUMPOSITION office, self-organized working group meetings were decisive for the high quality of the overall neighborhood development. The ATTACCA office was commissioned for project management. The results were presented in February 2020.

Event band and ground floor zone
One key to neighborhood development - as previous experience had also shown - lies at the ground floor level. For this reason, in the "An der Schanze" neighborhood, these zones were coordinated between the stakeholders at an early stage and care was taken to achieve as diverse a mix as possible. In addition to residential use, this also provides for commercial, office and shopping opportunities and offers a large degree of scope for adaptation and further development. The focus is on small-scale uses, which are concentrated primarily in the central event band between the development sites north of Simone-Veil-Gasse. Here, a mixed-use center will be created for the neighborhood, but also beyond.

Urban wilderness - urban nature
In addition to this event band, the urban wilderness represents an essential open space for the new district. This open space was also designed from the outset to be cross-building. The natural transformation process from the current farmland to an urban wilderness with open meadow areas and shadier tree sections is the focus here. The largest contiguous green space between construction sites G2/G3 and H will be a space for experimentation and process, a teaching and learning space, itself constantly learning and thus growing. In addition, ecological provision is ensured through nesting sites, extensive green roofs and optimized open spaces through GREENPASS® simulation.

Mix and dialogue in living
Not only between the uses, but also within the uses themselves, a diverse mix is sought in the "An der Schanze" neighborhood. The aim of the competition was to include current social developments and needs in order to be able to create targeted offerings. One group to which special attention was paid is single parents. Here, too, dialogue helps with implementation: for example, selected apartments are offered for allocation via the JUNO association. Neighboring apartments can be allocated to separated parents or to single parents with family members and elective relatives via a tandem allocation. In cooperation with Volkshilfe Wien, apartments are made available for childminders.

Sharing mobility
In the "An der Schanze" neighborhood, the concept of elevated garages in the form of collective garages is being actively addressed. Garage spaces are thus selectively integrated into the urban ensemble. At two mobility points, future residents will have access to an e-charging station for e-bikes, a bike service station, and two e-charging stations for cars.

More information about the "An der Schanze" neighborhood and which processes have taken place so far can be found here.

Tips in the Grätzel


Here you can get information about the development of the area and the status of planning. If you have ideas and suggestions, you are invited to participate.


Even before the start of construction of the “An der Schanze” neighborhood in Donaufeld, another IBA_Vienna project can be visited in Donaufeld: the vivihouse, a wooden building, implemented in modular timber frame construction, which is specially optimized for the use of ecological raw materials.

Walk and cool off on the Upper Old Danube


A few minutes’ walk from the future “An der Schanze” neighborhood, the banks of the Upper Old Danube invite visitors to take a walk and cool off on hot summer days.

The neighborhood at a glance 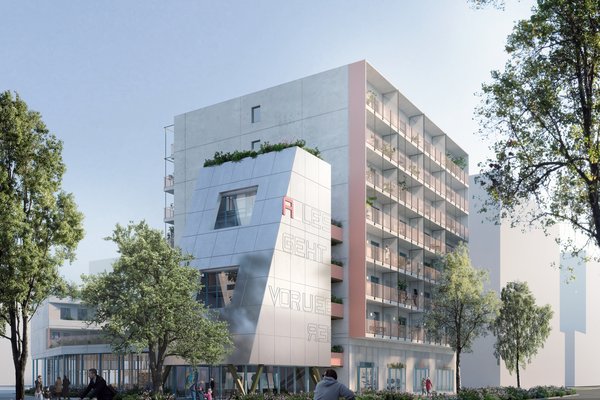 Innovative forms of housing for single and separated parents are offered at a prominent key spot in the urban development, distributed over several components.
Read more 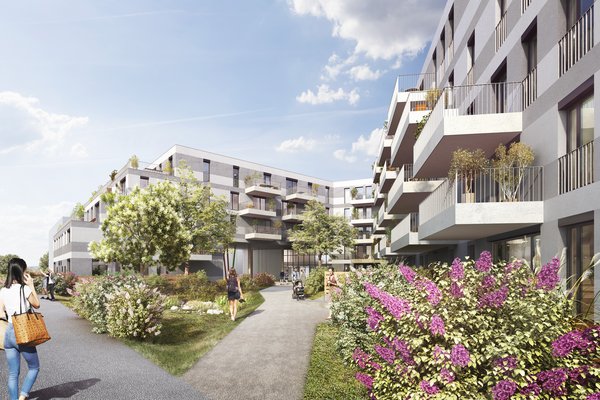 The 4-storey terrace-shaped building with its open courtyard and partially greened facade forms the southern end of the development area.
Read more 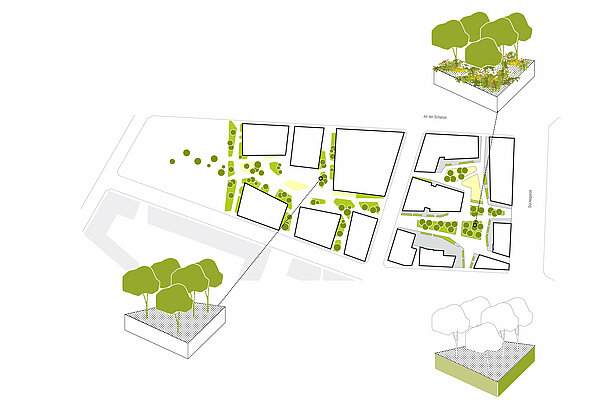 The second stage of the dialog-oriented procedure made it possible for landscape planners to deal intensively with the conception of the outdoor space together with the developers already during the developers' competition.
Read more 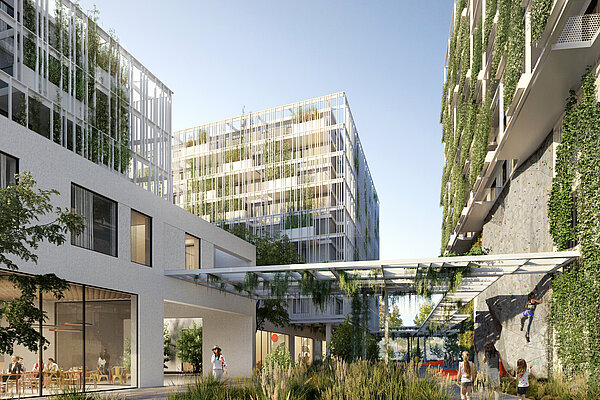 Fünf Freunde has set itself the goal of creating a livable environment for single parents and their children as well as the settlement of small businesses right from the start.
Read more 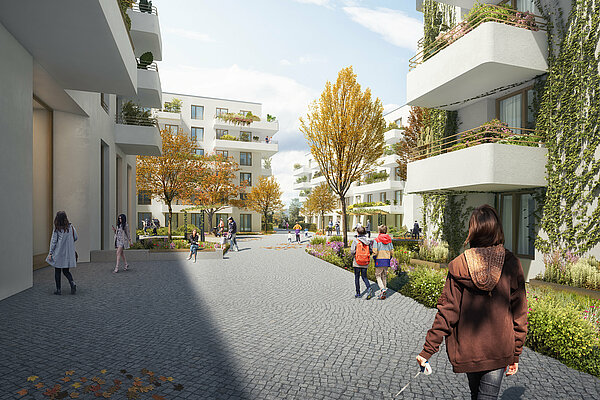 The project Gut gerüstet reactivates the spirit of the cooperative idea. Solidarity and a modern service are in the foreground.
Read more 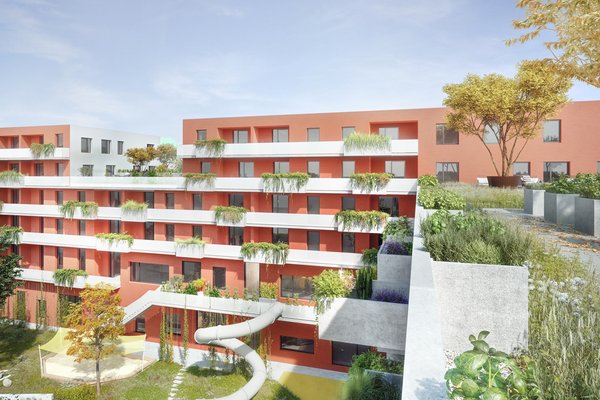 The project involves the construction of a residential building, which will be supplemented by lively uses from the ground floor with a nursery school to the fourth floor with rooftop terraces and adjoining communal space with laundry room.
Read more 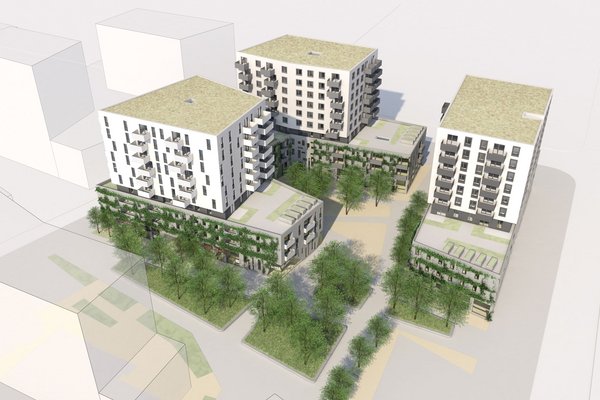 Offers such as the Raumteiler and the Supergreißler as well as medical facilities in the immediate vicinity make building site E an important location in the neighborhood.
Read more 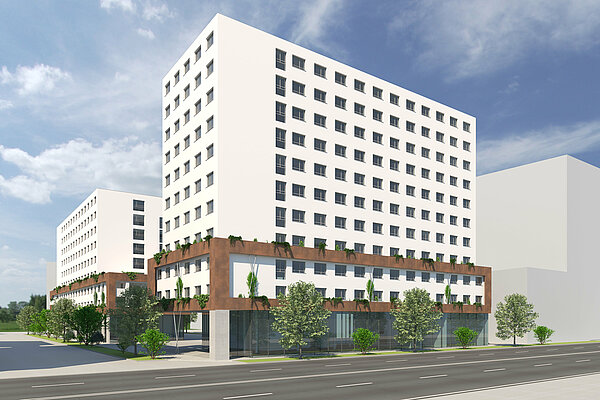 The student residence of tSHG Stiftung Studentenhausverein der Freunde der VUW supplements the variety of uses in the neighborhood. Some of the uses are available to the whole neighborhood.
Read more 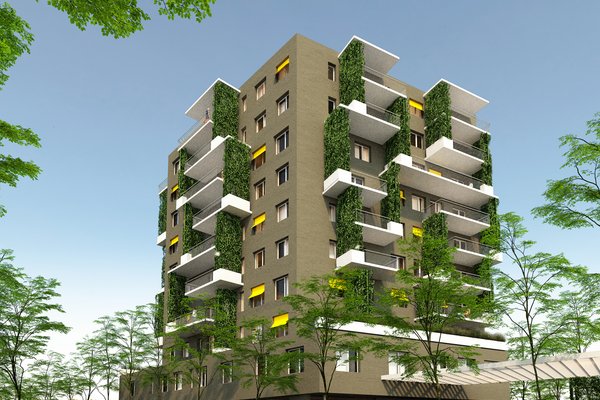 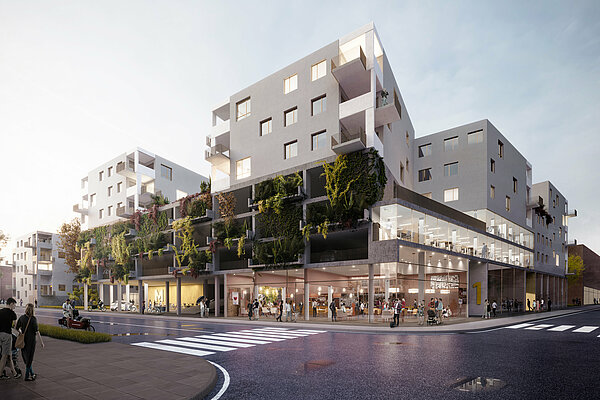 In addition to subsidized apartments, the project offers a collective garage, a neighborhood café and a Work Zone—the heart of the project.
Read more 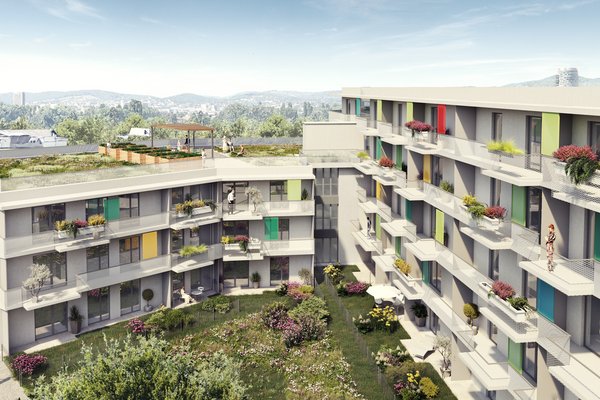 The project makes an important contribution to a socially mixed neighborhood with its mix of subsidized and privately financed apartments.
Read more 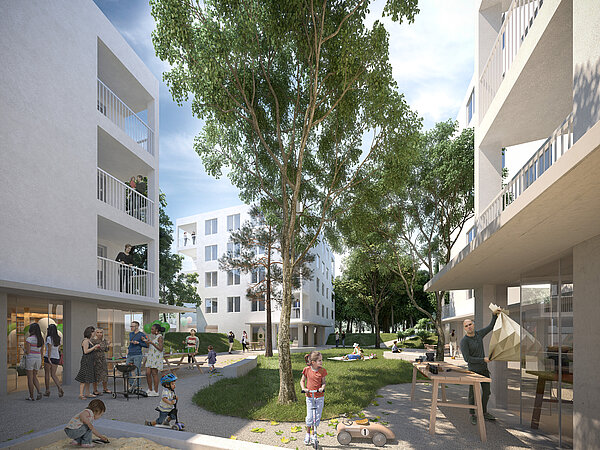 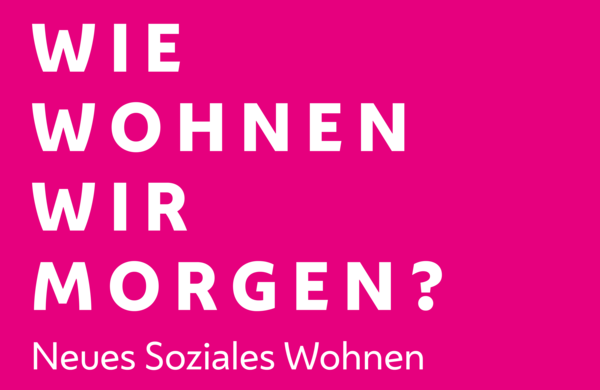 Autumn finale in the Donaufeld

IBA-Focus – The City in Times of Climate Change 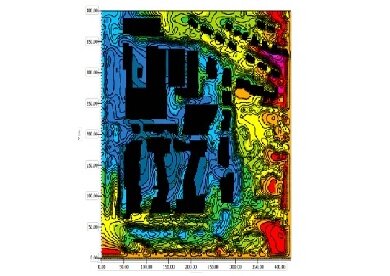 The IBA candidate "Biotope City CCA" and its topic "The City in Times of Climate Change" will kick off the multi-stage discussion process on topics of the future. 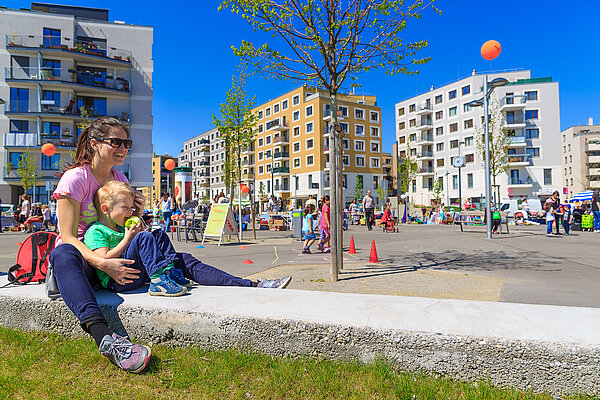 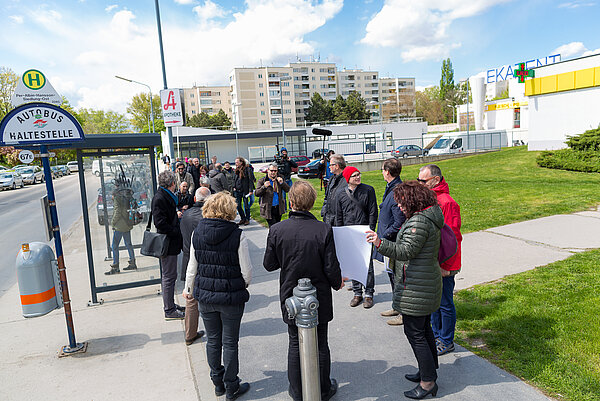 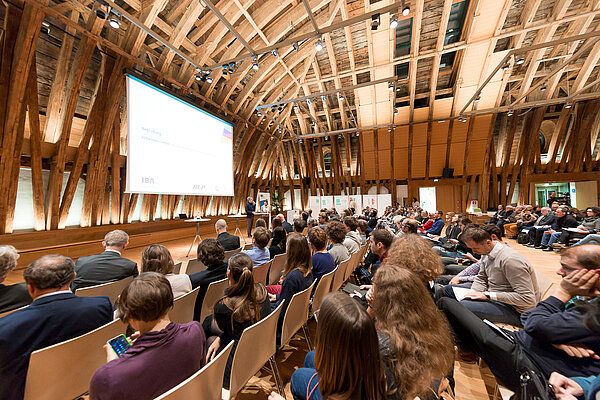 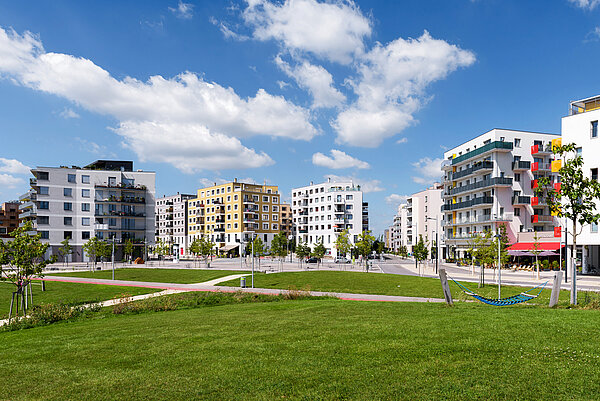